Dunnington village lies on a glacial moraine four miles from the centre of York. The area has been settled since prehistoric times due to the Ridgeway which runs from the Wolds to the Pennines. Settlement by the Celts and occupation by the Romans is much in evidence from the finding of Iron Age and Roman pottery in an archaeological dig organised by the local history/archaeological group. Dunnington is mentioned in the Domesday Book along with Scoreby, Grimston and another lost village. Throughout its long history Dunnington has been an agricultural village with the Church at the heart of village life. During the Civil War in the 17th century Dunnington fought on the side of the Puritans as the rector of the Church had strong Puritan leanings.

The medieval fields are still prominent in the village with Eastfield, Intake, Manor, Thorntrees and Undergate. In the 18th century Dunnington Common was enclosed when the Enclosure Acts were implemented in 1772, resulting in the field structure that we know today. The century was also a period of prosperity resulting in the construction of many houses which are still in use today.

In the 19th century, the village was the site of a private lunatic asylum from 1828 to1880. This had a chequered history as it was threatened with closure in the 1850’s because conditions were so bad. Consequently there was a marked improvement which continued until its closure. The village and surrounding area was renowned for chicory production with labourers coming from Walmgate to harvest the crop. In 1850 a Lock Up was built in the Square to house rowdy and drunken workers before they were marched off to the petty sessions in Escrick. A Temperance Hall was built in 1889. By 1903 it was in need of help so a village committee was formed and the hall became The United Club and Reading Room. Dunnington had Dame schools for the poor in the 18th century and early 19th century. By 1836 the village school was described as “small and in a dilapidated state”. It was resolved to build a new school from church funds. This opened in 1839 but by 1902 conditions there were so bad that the school authorities ordered that improvements must be made or their Church of England status would be lost. This work could not be funded by the village alone and help was give by Mr. J. J. Hunt who provided the balance of the money. The 19th century saw the development of Agricultural Implement Manufacturing with a number of companies involved, foremost of which was Henry Hornshaw and Sons. 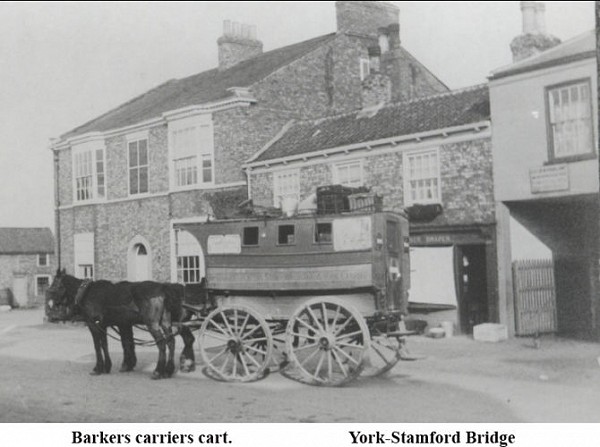 In the early part of the 20th century the Derwent Valley Light Railway was built from Cliffe to Layerthorpe in York. It was extensively used during WW2 to service the aerodromes around the area but by the 1960s part of the line was closed down and the end came with the last train being run in 1981. WW1 saw 125 men go to the front of whom 23 were lost. In WW2 5 men were lost and the war came to the village with a German aircraft crashing on Dunnington Lodge Farm killing three of the family. It was after WW2 that the village began to expand with the development of a number of new housing estates, particularly in the 1960s and 70s. Village activities came into prominence as Art and Drama groups were formed and the Playing Fields Association catered for those with sports interests. Charities benefited from various activities in the village including York Against Cancer, RNLI, and NSPCC to name but a few.

To celebrate the Millennium the village planted Oak trees and the embroidery group came together to make a Wall Hanging. In 2014 two more Wall Hangings were created in dedication to the end of WW1. All these hangings are displayed in the Reading Room together with the memorial to the soldiers of Dunnington in WWI.