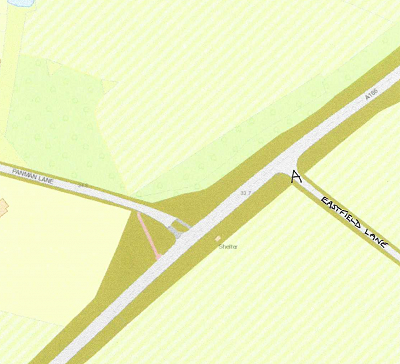 At the Parish Council meeting held on Monday 8 March 2021 the following motion was unanimously passed:

The Parish Council requests that the City of York Council progress with a road closure of Eastfield Lane at the junction with the A166 (point A) without delay to improve road safety at the junction itself given recent accidents and to improve the pedestrian and cyclist experience along the adopted single track country lane section of Eastfield Lane.

Eastfield Lane sees a disproportionate number of delivery vehicles, presumably directed by their sat-navs, turning off the A166 to access the village. In addition residents of the village, for some reason, use Eastfield Lane as a “rat run” to and from the A166.

The single-track carriageway is not suitable for this traffic which is destructive to the country lane both in terms of damaging the surface and verges. The carriageway can be very dangerous in winter as it does not receive any de-icing treatment. It often compromises the user's safety and enjoyment of this popular walking and cycling route connecting Dunnington with Holtby and beyond.

This traffic should be stopped from using Eastfield Lane as a short cut and instead use the much more suitable route to and from the village via Church Balk off the A166.

There are only four residential properties that could be affected in a minor way by this proposal and access to these properties is still maintained from the village end of Eastfield Lane.

There is no reason why agricultural traffic could still not access Eastfield Lane from the A166 by means of a suitably positioned gate, set back from the A166, allowing vehicles and machinery to pull off the A166 to unlock and open the gate.

Any gate will require a suitable gap at the side to allow for pedestrian and cycle access.

Progression of this closure request through the regulatory process as soon as possible will allow Eastfield Lane to be used safely and sensibly.

This proposal also has the support of the following people: